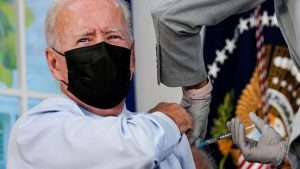 As rampant inflation continues to kick Americans in the teeth, the Biden administration can’t stop doing victory laps over how much they’ve ‘accomplished’ – by taking credit for things that were already in motion.

On Thursday, the White House patted itself on the back once again – bragging about ‘8.3 million jobs’ and ‘the fastest decline in unemployment to start a President’s term’ in history — the natural reaction to the government’s job-killing pandemic restrictions being lifted.

But wait, they also lied – claiming that when Biden took office, “millions were unemployed and there was no vaccine available,” which is categorically false.

For starters, Biden himself was vaccinated before taking office. In fact, more than one million doses per day were being administered when Biden took office under the Trump administration’s ‘Operation Warp Speed.’

And while the admin can count on Twitter not to label their tweet ‘false or misleading’ – as they so frequently did during the last administration, the lie was so blatant that CNN even called them out on it – and they issued a correction the next day (it wasn’t a lie, they simply ‘misstated’ a fact).

The people aren’t buying it…

Must be really hard when they can’t blame Putin or Trump for their own incompetence.