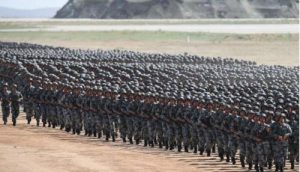 A Former Trump-era deputy assistant defense secretary Elbridge Colby has said that the United States should prepare for a “limited war” with China. Colby had outlined his prescription for how to “win “a conflict in the book which calls for an “Asian Nato.”

If the US is to win a war with China, it should direct most of its military resources to the Indo-Pacific and form an Asian Nato to prevent mainland forces from setting foot on Taiwan. So are we going to have another war? Who knows, but prepare for anything.

For Colby, a Pentagon official during Donald Trump’s administration, a major war between the two countries is becoming ever more plausible. In response, he outlines a “denial defense” strategy which he says should be America’s playbook.

Colby was the main crafter of Trump’s 2018 national defense strategy, which decisively shifted the US from concerns about terrorism and towards great power competition, naming China a “strategic competitor”. –South China Morning Post

During their virtual summit in November, Xi warned Biden against encouraging Taiwan’s independence, calling it “extremely dangerous, just like playing with fire”. Zhao Tong, a senior fellow at the Carnegie-Tsinghua Centre for Global Policy in Beijing, said China would hardly perceive Colby’s strategy as one of defense – it would be likely to cause misjudgments on both sides, increasing the likelihood of precipitated war.

Zhao added that Colby’s suggestion a Chinese military plan post-unification with Taiwan could be an overthinking or misreading of the situation.

“If Washington adopts what Colby is proposing, such as strengthening the alliance system in the region, and be more clear in their backing in defending Taiwan, all these would surely be understood as direct and targeted attacks at China,” he said.

“This could even precipitate war.” –South China Morning Post

There have been rumors of wars over Taiwan for some time now, and nothing serious has yet to materialize. All of this could be the rhetoric between the tyrants of two nations and nothing more.

The post War Hawk From The Trump Era Warns That The US Should “Prepare For A Limited War” With China first appeared on SHTF Plan – When It Hits The Fan, Don’t Say We Didn’t Warn You.

The Biden Legacy: Former Policewomen Are Hunted for Assassination and Beatings by Taliban in Afghanistan

IT’S A CRISIS: Car Manufacturers Around the World Are Halting Production Due to a Lack of Computer Chips – Repair Shops Also Affected

Democrats showed how little they care about bipartisanship by failing to sufficiently consult two Tennessee GOP senators about one of Biden’s nominees for a...
News & Current Events

Dr. Vladimir Zelenko was on the frontlines of the fight against COVID.He saw great success with his early use of hydroxychloroquine — until his...