Ukraine Claims Russia Is “Increasing” Attacks In “All Directions” 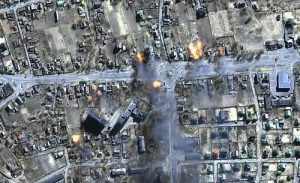 Ukraine’s rulers are claiming that Russia’s rulers have dictated increased attacks in “all directions.” Ukraine’s military command posted a public social media message warning the public that Russia is “increasing the pace of the offensive operation.”

“Russian occupiers continue to suffer losses on land,” the statement from Ukraine claimed. “In the Donetsk and Luhansk oblasts only, six enemy attacks have been repulsed in the past 24 hours, five tanks, one artillery system, twenty-two armored vehicles, one car, and one anti-aircraft gun have been destroyed.”

The warning to the public served to also inform Kyiv’s Western backers come the day after Russia’s President Putin threatened “lighting”-fast retaliatory strikes on “decision-making centers” if foreign countries meddle in the conflict. He said during an address before the Council of Legislators in St. Petersburg that the armed forces remain undeterred as “all the objectives will definitely be carried out” in the Ukraine operation, before warning:

“If someone intends to interfere in what is going on from the outside they must know that constitutes an unacceptable strategic threat to Russia.

“They must know that our response to counter-strikes will be lightning-fast.”

According to a report by ZeroHedge, Ukrainian officials have also said Russia has begun imposing parallel local governments, for example in the now fallen city of Kherson the Kremlin has appointed its own mayor and a pro-Russian administration over the region, which declared that Kherson’s return to Ukrainian control is now “impossible”.

Russian Foreign Ministry spokeswoman Maria Zakharova suggested Thursday that Russia could act to bring order to Transnistria, bringing Russia into more direct conflict with Moldova. “We are alarmed by the escalation of tension in Transnistria, where in recent days there have been several incidents of shelling, blowing up social and infrastructure facilities,” she said. “We regard these actions as acts of terrorism aimed at destabilizing the situation.” –ZeroHedge

Remain aware of the global geopolitical crises that are unfolding daily. At some point, this conflict could spill over and affect us all. Prepare and keep your eyes open. Use discernment to know when the propaganda is getting strong.

Previous articleMike Lindell’s Giza Dream Sheets — “The Nicest I’ve Ever Owned” Now As Low As $39.99
Next articleChildren’s Risk Of Death Increases Over 5,000% After Being Injected With The mRNA “Vaccines”
Survival News & Info