Overnight into Tuesday, a third airfield deep inside Russia came under attack, suffering a fire after an oil storage depot was bombarded by what the Kremlin described as a drone attack that was repelled after the initial blast. A large blaze raged throughout the night as emergency crews responded.

It came the day after two explosions rocked a pair of air bases even further inside Russian territory, which killed three military personnel in the Ryazan region, and the Russian Engels-1 airbase in Saratov. Those incidents were also subsequently described by the defense ministry as the result of drone attacks.

The Russian city of Kursk, which lies closer to Ukraine than the other two sites of attack, had thick black smoke rising over its airfield in the early Tuesday hours. “Oil tankers at a base near the city of Kursk, around 60 miles from the border, were on fire and streaming smoke into the sky early Tuesday morning,” The Daily Mail writes based on regional sources. 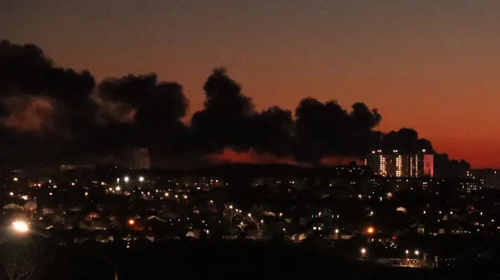 International reports say the large Kursk fire has burned for some ten hours, given a large oil depot was ignited, following the attack:

The inferno covered almost 5,500 square feet and new teams of firefighters were being rushed to the scene, local media said.

Increasingly it is looking like Ukraine has made the decision to try and hit much more aggressively inside Russian territory, whether utilizing drones or possibly the longer-range missiles being provided by the West, marking a huge escalation.

“Drones were also targeted at a fuel store in Bryansk region, but failed to cause major damage, said Russian sources,” Daily Mail continues.

The Monday attacks had damaged “two nuclear-capable bombers that were thought to be preparing for an attack on Ukraine, killed three ground crew and injured two more.”

As for the fresh probable drone attack on the Kursk base, Britain’s ministry of defense said, “If Russia assesses the incidents were deliberate attacks, it will probably consider them as some of the most strategically significant failures of force protection since its invasion of Ukraine.”

The UK defense official was quoted further as saying, “The Russian chain of command will probably seek to identify and impose severe sanctions on Russian officers deemed responsible for allowing the incident.”

So it seems this is Ukraine’s response to the widespread aerial attacks on its national energy grid, namely to extend its counteroffensive toward conducting risky cross-border raids on major Russian bases.

The significance of this can’t be overestimated – it takes all sides into dangerous, new, and unpredictable territory which makes eventual direct Russian-NATO confrontation all the more likely.

Ukraine’s Ukrenergo is meanwhile warning the population of more emergency power shutdowns to come across the country. “Due to the consequences of shelling… to maintain the balance between the production and consumption of electricity, a regime of emergency shutdowns will be introduced in all regions of Ukraine.

“In priority, electricity will be supplied to critical infrastructure facilities,” Ukrenergo said of the rationing measures on Telegram Monday, during the fresh wave of many dozens of Russian airstrikes.

The 400 mile distance of Engels airbase from the Ukrainian border raised eyebrows following Monday’s attack. It also hosts long-range nuclear-capable strategic bombers, some of which were likely damaged. 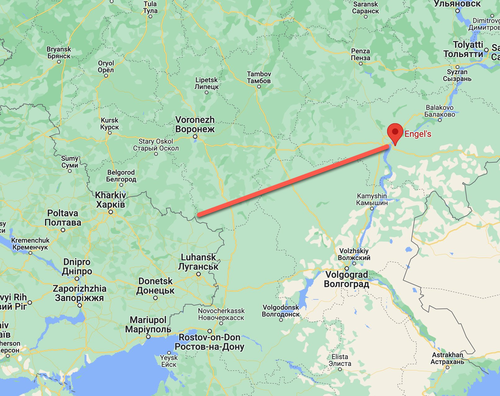 Russian defense minister Sergei Shoigu is at the same time vowing that Russia will not stop until the “military potential” of Ukraine is crushed, according to Interfax. Shoigu said in a defense ministry conference call, “The Russian Armed Forces are inflicting massive strikes with long-range precision weapons on the military command and control system, defense industry enterprises, and related facilities to crush Ukraine’s military potential.”

“The Russian armed forces continue to liberate the Donbas. Recently, Mayorsk, Pavlovka, Opytnoye, Andreevka, Belogorovka Yuzhnaya and Kurdyumovka have come under our control,” he added.

Independent journalist Michael Tracey summarizes the game-changing nature of the events of the last 24 hours as follows, and the significance of Washington clearly encouraging it, or at least not pressing Ukraine’s forces to put on the brakes as far as the fresh cross-border attacks…

“So the US is engineering the war effort of a client state now bombing targets 400 miles inside Russia — confirmed via the usual tactic of oblique, cheeky acknowledgment from top Ukraine officials. Definitionally an “escalation” — this is what the US has signed onto indefinitely.”

The World Health Organization keeps a list of viruses and bacteria with “pandemic potential”. These nine pathogens are the ones most likely to infect...