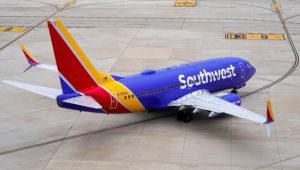 The cancellations of flights by Southwest Airlines continue. The pilot union is continuing to deny that it has anything to do with the “vaccine” mandated. Many are now thinking SouthWest is lying to them.

Some 355 Southwest Airlines flights were canceled and 571 delayed as of yesterday morning, according to data from FlightAware. The cancellations and delays came after the airline, known for its budget fares, canceled around 2,000 flights over the weekend, leaving passengers stranded at airports throughout the United States.

Southwest blamed the cancellations and delays on weather, while other airlines had relatively no disruptions by comparison. “[Air traffic control] issues and disruptive weather” are still taking the blame the Southwest Airlines Pilots Association (SWAPA), a union representing some 10,000 Southwest pilots said.  The union said that it would not authorize such action (mandatory vaccine protest), and sided with the airline in blaming “staffing at Jacksonville Center,” the country’s fourth-busiest area control center which oversees air traffic in parts of Florida, Georgia, Alabama, South Carolina, and North Carolina.

The pilot’s union said on Sunday that “there are no work slowdowns or sickouts either related to the recent mandatory vaccine mandate or otherwise.” The union also said that while other airlines were relatively unaffected by the supposed staffing issue in Jacksonville Center, Southwest’s “operation has become brittle and subject to massive failures under the slightest pressure,” according to a report by RT.

Passengers affected by the weekend’s cancellations also reported that not only were flights not taking off, but Southwest’s airport desks were unstaffed. The airline has not yet explained this shortage of ground staff.

. @SouthwestAir update… Flight cancelled out of nowhere and now NO ONE is seen at the front desks to assist customers. This is the worst representation of customer service I’ve ever witnessed in my life. pic.twitter.com/3VUemrW0IW

The mainstream media and the ruling class along with their “helpers” in corporate America seem to not want to make the masses aware of just how undesirable this new “vaccine” is.

Walkouts have been reported in a number of other critical industries in recent days. Shipbuilders in Newport News, who are also required to get vaccinated by December 8, staged a protest on Friday, and “unforeseen crew issues” have halted trains in the Northeast, though the information in the mainstream media remains thin on the ground.

“The mainstream media is doing its best to keep a lid on the expanding rebellion against the vaccine mandates,” former US senator Ron Paul wrote on Monday, adding that strikes and walkouts threaten “to completely derail an already crumbling economy and to obliterate a deeply unpopular US president and administration.”

This has the potential of creating real change if it is truly happening and people are walking out refusing the vaccine. People will figure this out much more quickly if the mainstream media continues to try to cover up how unpopular the “vaccine” mandates are. It looks like December 8th could be a very important day if these companies go through with the vaccine mandates. This system could crash and burn quickly.  Keep your eyes open and stay alert.

Previous articleAmerican Stasi: Corrupt Biden DOJ and FBI Are Now Arresting Any of the Tens of Thousands of Trump Supporters Who Were Standing HUNDREDS of Yards Away from US Capitol
Next articleNew Fits for a Modern Age – N8 Tactical Xecutive IWB Holster
Overland Adventure Vehicles