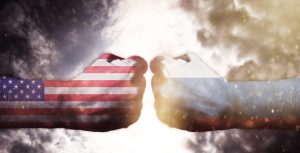 Speaking to Russian journalists, the government official called the move by the two nations “the latest serious mistake with long-lasting ramifications” in the West and said it demonstrated “the level” of those taking such decisions. “It reflects the false distorted perceptions of events taking place in the world by the policymakers in the West, particularly in northern Europe. It is obvious for us that the security of Sweden and Finland will not be strengthened by it,” Ryabkov said.

NATO is continuing to push Russia into what could be a major conflict escalating into a World War. “[NATO] should have no illusions that [Russia] would simply tolerate it,” Ryabkov said adding that the two Nordic nations chose to “sacrifice common sense” and take a step to further escalate military tensions in Europe by seeking NATO membership, according to a report by RT.

The ruling classes in Finland and Sweden are expected to vote to apply for NATO membership after their respective governments supported the policy change last week. Both nations remained outside of the United States-led military bloc throughout the Cold War, but claim they need to join it now due to Russia’s offensive against Ukraine and in spite of Russia’s threats.

This is an obvious escalation intentionally done to provoke Russia by the West. Russia stated that NATO’s expansion toward its border since the collapse of the Soviet Union posed a critical threat to its national security. The Russian government claimed that the assistance that the alliance has given to Kyiv to build up its military had crossed a red line and forced Russia’s hand.

And the U.S. can not be bothered to stay out of conflicts and wars. The rulers tend to send their slaves off to die for any and every reason to cement their own power, so it isn’t a surprise that the escalation has continued. At some point, this could pop off into a worldwide conflagration, and we should all stay alert to that possibility.

Previous articleArby’s Manager Admits Urinating ‘At Least Twice” in Milkshake Mix for His Own “Sexual Gratification”
Next articleHORROR: California Woman and her Dog Killed in Hit-and-Run Dragged Underneath Vehicle for 8 Miles
Survival News & Info