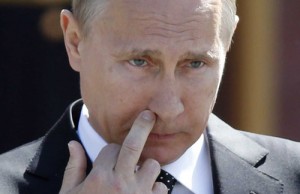 President Biden’s laughable attempt to create a strong deterrent to Russian “aggression” in Ukraine was further undermined early this week by a video meeting between Russian President Vladimir Putin and a group of Italy’s most important executives from 25 top companies to discuss new business opportunities.

Following the end of the meeting Wednesday, Putin hailed the effort to warm economic ties between Moscow and Rome as a great success, further cementing Russia’s ties to Continental Europe while Washington threatens economic sanctions – but not much else – as more than 100,000 Russian troops are poised on the border between Russia and eastern Ukraine.

According to the Moscow Times, Putin praised Italy as “one of Russia’s leading economic partners”.

“I would like to emphasize that we consider Italy to be one of Russia’s leading economic partners…and we see serious prospects for expanding the Russian-Italian business partnership,” Putin said, according to a transcript of opening remarks published by the Kremlin.

This isn’t the first time Italy has bucked its western allies in the name of commerce. Italy’s decision to become the first EU nation to join China’s BRI initiative was also harshly criticized by Washington, even if leaders in Rome insisted that any economic development would be worth it.

The FT reported that the video event was organized by the Italy-Russia chamber of commerce and the Italo-Russian business committee. It received the government’s OK in November with the knowledge of Italy’s foreign ministry. The meeting included top executives from some of Italy’s largest companies, including Pirelli, Generali, and UniCredit.

Before the Wednesday meeting, the Kremlin said would cover “the potential for further expanding ties between the two countries’ businessmen”. However, pressure from the Italian government managed to convince some of those who had RSVP’d to cancel.

Here’s a breakdown of senior executives who were on the list of attendees. Although whether they ultimately attended is unclear. There were some last-minute cancellations due to government pressure:

Some 500 Italian businesses have operations in Russia, Putin said, and the two nations enjoy $8 billion in bilateral investments, Putin said. “​​During the first 11 months of last year, bilateral trade grew by 54% to $27.5 billion. At the final count for the year, it will probably pass $30 billion,” he added. Those involved with the event defended it as a routine event to bolster bilateral ties.

Italian officials and businessmen defended the event, which they said was part of a regular cycle of meetings between Putin and companies with big investments in Russia. “Everyone’s objective is dialogue, not escalation, in this context there is no political stance on the part of businesses,” said one business leader who is planning to attend. Lucio Caracciolo, analyst and editor-in-chief of geopolitical magazine Limes, said: “There is the risk of economic sanctions that would negatively impact the Italian economy and the Italian businesses that trade with Russia, therefore the meeting is a way to keep dialogue channels open.”

Meetings like these are important to Putin because he believes “big business can weaken the west’s Russia policy,” said Alexander Gabuev, a senior fellow at the Carnegie Moscow Center. Of course, Germany’s new government has already shown that it’s not just special interest groups who are reluctant to anger the Kremlin.

Trade ties between the two countries have been improving ever since the famous friendship in the 2000s between Putin and longtime Italian PM Silvio Berlusconi. And even long before that, as Politico points out.

Even from the days of the Cold War, Italy has had unusually tight links with Russia. In the 1960s Fiat produced cars in the Russian town of Tolyatti, named after Italian communist leader Palmiro Togliatti. Eni has also been operating there since the 1960s, while a Pirelli factory received the Soviet Union’s Order of Lenin award in the same decade. “Among European countries, Italy is probably the closest to Russia for economic and cultural ties,” noted Aldo Ferrari, a Russia expert at think tank ISPI and professor at Ca’ Foscari University in Venice.

Meanwhile, the Italians have been somewhat preoccupied lately as the third round of voting to elect Italy’s next president has also failed to yield a suitable result, opening the door for round four on Thursday, as many disagree about whether PM Mario Draghi should be elevated to replace President Sergio Mattarella. Whatever happens, the idea is to show that Draghi will do “whatever it takes” to ensure his reform policies persist past the end of his term as PM in 2023.

The post Putin Holds Economic-Development Meeting With Italian Executives Amid Rising Tensions With West first appeared on SHTF Plan – When It Hits The Fan, Don’t Say We Didn’t Warn You.

Previous articleAuthoritarian Madness: The Slippery Slope from Lockdowns to Concentration Camps
Next articleFauci: Children Under The Age of 4 WIll Get 3 Doses Of The COVID “Vaccines”
Survival News & Info