Prep For An Explosion: Mauna Loa Is “Waking Up” 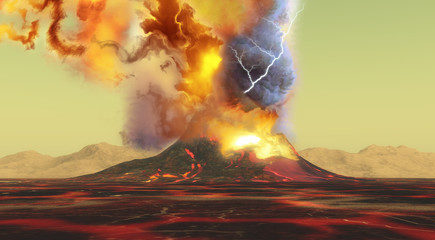 According to mainstream media, Hawaiian volcano Mauna Loa is “waking up” and those in the area should “prepare for an eruption.” Hopefully, anyone who reads this site and lives in Hawaii already has a SHTF plan in place that includes the possibility of a volcanic eruption, so here’s what we know.

Over the past week, the Hawaii Volcano Observatory has recorded over 200 small magnitude earthquakes below the Mauna Loa volcano. These and other observations of increased activity in recent weeks all point to an increased flow of magma into the volcano’s shallow storage system, according to the HVO.

According to a report by Forbes, while scientists emphasize that an eruption isn’t necessarily going to happen today or tomorrow, this week the HVO put out a release urging that “now is the time to revisit personal eruption plans.”

Mauna Loa is not currently erupting and it remains at a Volcano Alert Level ADVISORY. Scientists say this alert level does not mean that an eruption is imminent or that progression to an eruption from the current level of unrest is certain. But many are urging preparedness.

We would urge both preparedness and discernment along with the use of critical thinking skills. All of these combined are a winning combination in any SHTF situation.

Kilauea volcano has also had some odd developments lately. This volcano is also located on the Big Island. According to HVO, a small lava pond has developed near the western fissure during 5-7 March.

A plan for your family and a bug-out bag could come in handy. Make sure all members of the family know where to meet up just in case something happens when you are all separated.

Volcanic eruptions in Hawaii are not rare and can be devastating. Do not live in fear, but prepare in advance for any possibility.

The post Prep For An Explosion: Mauna Loa Is “Waking Up” first appeared on SHTF Plan – When It Hits The Fan, Don’t Say We Didn’t Warn You.