The FDA’s excruciatingly slow release of data related to Pfizer’s COVID-19 vaccine has already borne fruit, and it’s damning despite a trickle of just 500 pages per month out of 329,000 pages – which will take until 2076 to complete.

More than 25,000 of the events were classified as “Nervous system disorders.”

Another table of the 1st batch of 55 on Pfizer’s adverse events data:

No wonder they don’t want all the data released! pic.twitter.com/qmdi303krl

Since the vaccine has been publicly administered, there have been over 913,000 reports of adverse events in the OpenVAERS global database. 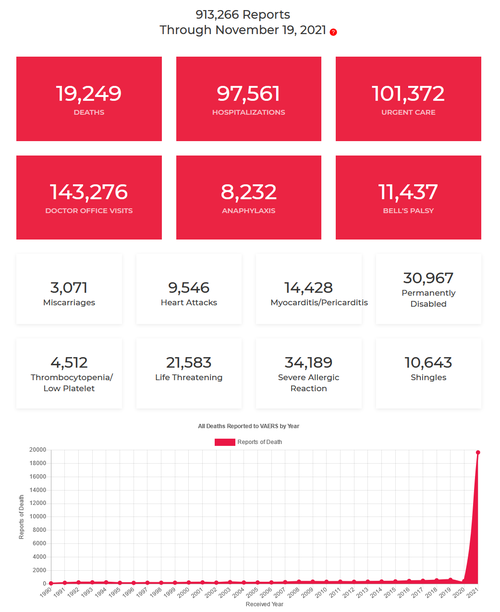 And that’s just what’s been reported.

Meanwhile, Twitter has suspended the account of @iGNORANTCHiMP – who brought much of this to light and corrected minor inaccuracies within his thread.

1/ CENSORSHIP ALERT!
Our friend @iGNORANTCHiMP, Gal Shalev, was permanently suspended from Twitter today, when his tweet blew up virally, after sharing Pfizer docs handed to FDA. (See part 2)
I’m declaring a
*digital emergency state*
to protest against this censorship!!
>> pic.twitter.com/ODbEJNTiEE

The post Over 42,000 Adverse Reaction Reports Revealed In First Batch Of Pfizer Vax Docs first appeared on SHTF Plan – When It Hits The Fan, Don’t Say We Didn’t Warn You.

Top American Medical Journal Study Confirms the Risk of Myocarditis and Pericarditis After Receiving COVID-19 Vaccines – Risks is Highest After Second Vaccine in...

Kamala Harris can’t seem to find her way to the Southern border where millions crossed illegally under her and Joe Biden’s first year in...