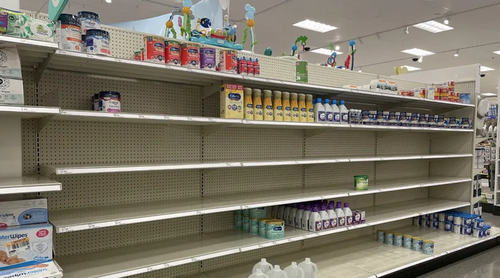 With 43% of baby formula out of stock across the country due to supply disruptions at the nation’s largest plant, images of empty shelves and desperate mothers have been flooding social media.

But don’t try to take matters into your own hands, moms. According to the New York Times, pediatricians “strongly advise” against trying to make baby formula at home.

Some are rationing food or driving to stores hours away only to find empty shelves. Others are heading online to look up homemade baby formula recipes that use anything from powdered goat’s milk to raw cow’s milk.

“Homemade formula is dangerous for babies,” said Dr. Katie Lockwood, an attending physician at Children’s Hospital of Philadelphia Primary Care. “Regular formula is F.D.A.-regulated and held to very high standards, the same way we treat medications. Making it at home is a lot riskier.”

Steven Abrams, spokesman for the American Academy of Pediatrics, said “The nutrients in homemade formulas are inadequate in terms of the critical components babies need, especially protein and minerals.”

Homebrew baby formula can also contain “an excess of materials or nutrients, like salt, which a baby’s developing kidneys or liver may be unable to break down.”

What’s more, babies can suffer from “water intoxication,” – where the “baby might get too much water” if the balance of nutrients and liquids are off, according to Dr. Suzette Oyeku, chief of academic general pediatrics at the Children’s Hospital at Montefiore, in New York City.

What’s their solution? Call your doctor! Go to a charity! Use cow milk in a pinch!

“The first call any parent or caregiver struggling to track down baby formula should make is to their child’s pediatrician. They may have formula samples on hand, or be able to help connect you with local charities or breast milk banks that can help.”

In a pinch, babies over six months — with no known allergies — can have pasteurized whole-milk cow’s milk for a brief period of time until parents are able to find formula. While not ideal in large part because it does not provide sufficient iron, it’s preferable to offering them homemade formula or diluting store-bought formula with water, Dr. Abrams said.

The Abbott Laboratories baby formula plant in Sturgis, Michigan was shuttered by the FDA nearly three months ago after receiving four reports of infants who were hospitalized with bacterial infections after consuming the formula from the facility – two of whom died.

So, the origin of the baby formula pocalypse was Abbott management’s refusal to repair dilapidated and failure-prone drying machines turning the plant into proverbial petri dishes for cronobacter, because…

They needed that $5.73 billion for stock buybacks, obvs pic.twitter.com/GBmn3n4SWn

According to NBC Boston, the FDA announced on Tuesday that it would allow ‘some’ products from the shuttered Abbott facility to be released on a “case-by-case” basis.

Now, the FDA is saying it will not object “to Abbott Nutrition releasing product to individuals needing urgent, life-sustaining supplies of certain specialty and metabolic formulas on a case-by-case basis.”

Abbott, meanwhile, says it will take at least two months before baby formula from the plant can return to store shelves. 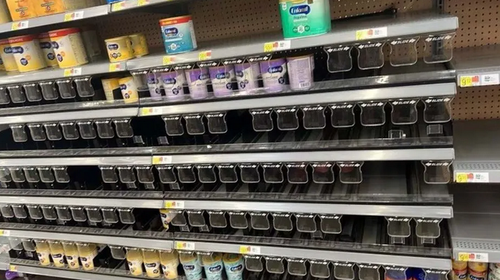 “We understand the situation is urgent – getting Sturgis up and running will help alleviate this shortage,” the company said in a Wednesday statement.

“Subject to [U.S. Food and Drug Administration] approval, we could restart the site within two weeks,” the statement continues “We would begin production of EleCare, Alimentum, and metabolic formulas first and then begin production of Similac and other formulas. From the time we restart the site, it will take six to eight weeks before the product is available on shelves.”

One has to wonder…

Why hasn’t @JoeBiden used the Defense Production Act to order the production of baby formula?

Why haven’t our journalists, who insisted that Trump invoke the Act during the pandemic (necessary or not), demanded Biden do so?

The post MSM Warns Against Homemade Baby Formula As Manufacturer Says ‘At Least Two Months’ Delay first appeared on SHTF Plan – When It Hits The Fan, Don’t Say We Didn’t Warn You.