Evergrande Denies Rumors Of Bankruptcy As Crisis Boils Over, Social Unrest Breaks Out Across China 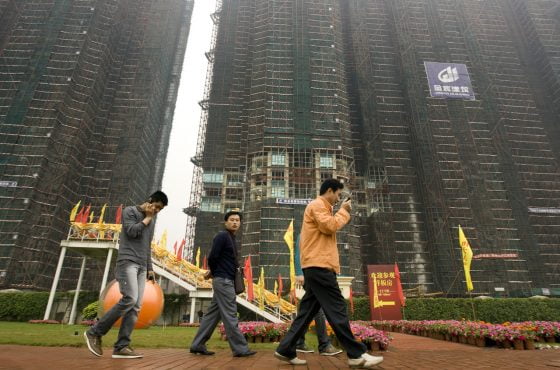 Prospective investors walk around the Royal Scenic Peninsula, an Evergrande luxury development in Guangzhou, China, on March 27, 2009. The real estate developer Evergrande once binged on debt; now the music has stopped, investors are panicking and experts are warning of an imminent failure. (Alex Hofford/The New York Times)

China Evergrande Group, the largest and most indebted, and certainly most insolvent property developer in China, is – together with its $300+ billion in debt – rapidly approaching its “China moment.”

Five days after reports of a technical default at Evergrande, which slammed China’s property market and sent Chinese junk bond yields to the highest level since March 2020, the company took the unprecedented step of publishing a statement on its website, according to which it is “indeed facing unprecedented difficulties but it firmly fulfills responsibilities.” The company added that it will go all out to resume work and production, ensure to deliver buildings, do everything possible to restore normal operations, and protect the legitimate rights and interests of customers.

The company’s statement was also prompted by the growing operational and liquidity crunch that has crippled Evergrande’s business and balance sheet, and as Bloomberg reports this morning is now manifesting itself in mounting protests by homebuyers, retail investors and even its own employees, raising the stakes for authorities in Beijing as they try to prevent the property giant’s debt crisis from sparking social unrest.

According to Caixin, police descended on Evergrande’s Shenzhen headquarters late Monday after dozens of people gathered to demand repayments on overdue wealth management products. Protesters numbered in the hundreds on Sunday.

In what appears the sad – and inevitable – beginning of the end for Evergrande, the largest Chinese developer told employees at its office in Shenyang, near the border with North Korea, to work from home after staffers who bought the company’s WMPs staged a protest over the weekend, Bloomberg reported citing a person familiar with the matter said. In Guangzhou, angry homebuyers surrounded a local housing bureau last week to demand Evergrande restart stalled construction.

Videos of protests against the developer in other parts of China were being shared widely on China’s microblogging platform, Weibo. For now, there has been an indication that any of them have turned violent.

Employees of #Evergrande, largest real estate developer in #China, shouting “Return my hard-earned money!” outside the company as Evergrande is not paying them. Is the bubble finally bursting? I kind of “predicted” it last year. Watch my show here: https://t.co/a4XbIoWtqh pic.twitter.com/yi5rZfm7TP

As a reminder, among its creditors, Evergrande lists – in addition to official creditors – various shadow banking conduits such as Wealth Management Products (or WMPs). It is these shadow bank funding sources that are being throttled now as the company finds itself increasingly insolvent.

Monday’s uproar follows Evergrande’s proposal late last week to impose lengthy repayment delays on holders of WMPs, the lightly regulated investment vehicles that have become a key source of funding for the developer. While Evergrande tweaked its plan on Monday in an attempt to mitigate the backlash, retail and institutional investors will still face delays unless they accept repayment in the form of Evergrande-developed properties.

And while small-scale protests over troubled investment products aren’t unheard of in China, but they’re rare enough to attract attention from authorities who put a premium on social stability and have little tolerance for unsanctioned gatherings. Whether they prompt Xi Jinping’s government to change tack on Evergrande remains to be seen.

As a reminder, last week we learned that late in August, China’s top financial regulator signed off on the developer’s plan to renegotiate payment deadlines with banks and other creditors. It’s unclear if officials had given explicit guidance on WMPs.

The immediate reason for the public anger is the realization that (most of the) money may be gone: Evergrande proposed three repayment options for WMPs on Monday, according to Bloomberg source: they included repayment through cash installments, properties or investors’ payables on residential units they have already purchased, the people said.  Retail investors can choose to be repaid 10% of their principal and interest every quarter, starting the final working day of the month due. The new proposal treats all investors equally, in contrast to an interim plan released late last week that prioritized smaller investors, according to people familiar with the matter.

Apart from the cash option, the new plan allows investors to purchase Evergrande’s residential units, offices, stores and parking units at deeper discounts to offset wealth products due. If investors have bought Evergrande’s residential units by Sept. 12, they can also request to use the money they’re owed to offset payments. Details are still pending for the second and third option. Evergrande doesn’t disclose details of its WMP issuance, making it difficult to gauge the size of its outstanding products.

A local TV station in Anhui province reported that thousands of people in the province hold overdue Evergrande WMPs that total between 1.3 billion and 1.8 billion yuan, citing a wealth management consultant at Evergrande named Liu Yuntin. The consultant said 70% to 80% of Evergrande’s own employees in Anhui purchased such products and that’s likely to be the situation for branches nationwide. Evergrande repeatedly told staff that it would be responsible for interest and principal and that Hui Ka Yan himself would guarantee payments, Liu said.

Then there is the question of bondholders.

With more than $300 billion in liabilities, Evergrande has long been seen as the most systemically important distressed company in China, which unlike its similarly insolvent peer Huarong, has not yet been given an explicit bailout backstop from the government. On top of its obligations to WMP investors and bondholders, it owes about $147 billion in trade and other payables to suppliers and received down payments on yet-to-be-completed properties from more than 1.5 million home buyers as of December according to Bloomberg calculations.

Meanwhile, Evergrande’s bonds are pricing in a near-certain likelihood of default, with its dollar note due 2022 falling by about 2 cents to 31 cents on Monday.

China Evergrande Group may undergo one of the country’s biggest-ever debt restructurings if the developer’s distressed-level bond prices are any indication.

It’s “almost unavoidable,” said Nomura International Hong Kong Ltd. credit analyst Iris Chen. Her base case is a government-supervised deal that ensures Evergrande delivers homes and pays suppliers, where dollar debt investors would get 25% of their money back. Luther Chai, a senior research analyst at CreditSights Singapore LLC, also predicts Evergrande may default and enter restructuring. That risk is being priced in, with many of Evergrande’s dollar bonds trading near 30 cents. 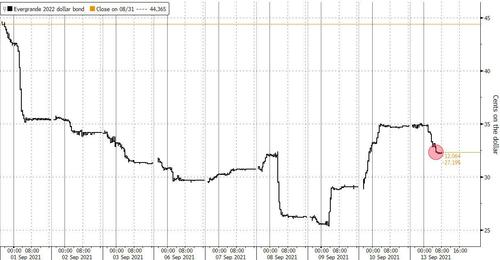 According to an analysis published on Sunday, Evergrande would undergo one of the country’s biggest-ever debt restructurings, if the developer’s distressed-level bond prices are any indication.

It’s “almost unavoidable,” said Nomura International Hong Kong Ltd. credit analyst Iris Chen. Her base case is a government-supervised deal that ensures Evergrande delivers homes and pays suppliers, where dollar debt investors would get 25% of their money back. Luther Chai, a senior research analyst at CreditSights Singapore LLC, also predicts Evergrande may default and enter restructuring. That risk is being priced in, with many of Evergrande’s dollar bonds trading near 30 cents. 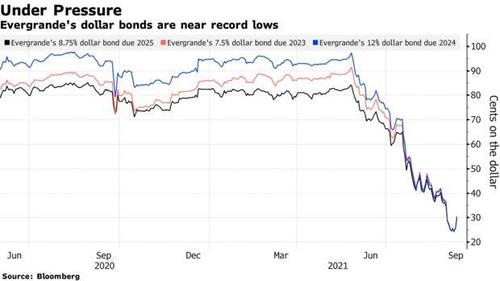 The trick is that nobody really knows what would happen in case of a full-blown bankruptcy. Debt defaults at developers the size of Evergrande are so rare in China that investors, analysts and regulators would only have a few case studies to go on. Kaisa Group Holdings Ltd. in 2015 became the first Chinese builder to default on dollar bonds. The restructuring of another, China Fortune Land Development Co., is currently under negotiation.

Any disorderly failure by the firm may pose a threat to the financial system. The lack of clear precedents also means Chinese authorities have yet to test mechanisms in solving a debt problem quite like Evergrande, which has more than $300 billion in liabilities.

Evergrande restructures its debt and bondholders recover a portion of their funds. This would be an “orderly wind down,” says Omotunde Lawal, head of Barings LLC’s emerging-market corporate debt group. There may be some contagion across China’s property issuers at first, according to Nomura’s Chen, though sentiment would improve as a key overhang would be removed. She expects only a 5% recovery rate for investors in Evergrande unit Scenery Journey Ltd.

It’s essential that normal operations continue after any potential default of a Chinese developer, wrote Morgan Stanley analysts led by Kelvin Pang in an Aug. 18 note. In other words, construction projects would be completed and homes would be delivered. And because dollar debt funding is “crucial” for developers, a defaulted property developer may not necessarily favor onshore creditors over those offshore, according to Morgan Stanley.

In a scramble to shore up its liquidity, the developer said it’s exploring the sale of interests in its listed electric vehicle and property services units, as well as other assets, and seeking to bring in new investors and renew borrowings. It’s also discounting properties aggressively to boost sales, with mixed success. Contracted sales, including those to suppliers and contractors to offset payments, tumbled 26% last month from a year ago.

Evergrande said in August it was forced to suspend work on some projects due to overdue payables. The company’s billionaire founder, Hui Ka Yan, pledged to complete projects this month, issuing what he called a “military order” to ensure property construction and delivery.

The post Evergrande Denies Rumors Of Bankruptcy As Crisis Boils Over, Social Unrest Breaks Out Across China first appeared on SHTF Plan – When It Hits The Fan, Don’t Say We Didn’t Warn You.