This article was originally published by Kevin Hughes at Natural News. 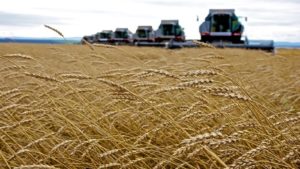 For Dr. William Mount, the wheat shortage is just an illusion created by the “United States Corporation” working in concert with the World Economic Forum and the United Nations.

“There is no world shortage of wheat, but there’s a global wheat problem. There’s a distribution problem being caused by the United States Corporation, which is banning the exportation of fuel on countries that need fuel to run the diesel and the trains that distribute the food. So there’s no wheat shortage,” Mount said in his recent podcast, noting that the U.S. has more oil and natural gas than the rest of the world combined.

According to Mount, America is stopping the distribution of wheat and that spells trouble for the rest of the world.

Mount said the Russians took $5 billion of farming equipment to farm the Ukraine to provide the world with food, but the U.S. ordered John Deere to shut off the tractors so the Russians can’t harvest the food.

The engineered wheat shortage looks worse because of the extreme weather conditions being experienced by other wheat-producing countries.

India, which is a big wheat producer, is experiencing a scorching 110 to 120 degrees temperature. Mount said the Indian government is already going to the FMGI or Farm to Market Global Initiative to start freeze-drying their food. (Related: Heatwave destroys wheat crops in India, accelerating global food collapse.)

He added that Pakistan is much worse with a 123 degrees temperature, which is drying up its rivers and lakes. The former U.S. Army Captain and TV broadcaster said Pakistan will need to import food from India which is having a hard time growing wheat due to the heatwave.

The Indian government has adjusted downwards the estimate for wheat production.

India’s wheat production settled at 109.59 MT in the 2020-21 crop year (July-June). The reduction of estimates has been ascribed to “early summer.” Still, Pandey said there is no case for regulating exports of wheat.

The government’s wheat purchase is anticipated to drop to 19.5 MT in the 2022-23 marketing year (April-March). It was much lower than the previous year due to various factors, including higher market prices of wheat in some nations compared to the minimum support price; stocks being held by farmers and traders in expectation of additional price hike; and lower production than estimated in some nations.

Watch the video below to know more about the global wheat problem.

This video is from the .

EDITOR’S NOTE: The United States is a corporation and it is also slavery. Has anyone ever wondered why the government won’t ban corporations? Because they’d have to ban themselves, and do we honestly believe they would do that? We need to stop allowing them to have power over us.