This article was originally published by Ethan Huff at Natural News under the title: Suddenly Bill Gates confirms what we’ve been saying all along: Covid is “kind of like the flu” with a “low fatality rate” 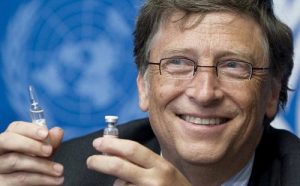 Billionaire eugenicist Bill Gates is finally admitting that he was dead wrong about the Wuhan coronavirus (Covid-19).

The Microsoft co-founder says that he and other self-proclaimed “authorities” on the matter overreacted to the virus, which is not nearly as much of a threat as he originally claimed.

“It wasn’t until early February, when I was in a meeting, that experts of the foundation said, ‘there’s no way’ that Covid-19 could have been contained,” Gates recently stated.

Early on, Gates unveiled a “Mark of the Beast” implant technology to be incorporated into “vaccines” for the virus.

“That was a pretty scary period where the world didn’t go on alert, including the United States, nearly as fast as it needed to,” Gates still insists.

By reclassifying covid as just another “flu” virus, the powers that be plan to push everyone to take seasonal covid shots

By the time the “Omicron” (Moronic) variant of the Fauci Flu appeared, the jabs were suddenly no longer as effective as they once were, Gates says.

“Once Omicron came along, the vaccine is not reducing transmission, hardly at all, particularly about three or four months after you take the vaccine,” the king of vaccines says.

In essence, the Fauci Flu is just the flu. Gates admits it, and so does the U.S. Food and Drug Administration (FDA).

According to FDA Commissioner Robert Califf, Principal Deputy Commissioner Janet Woodcock, and Dr. Peter Marks, the agency’s top vaccine official, the Chinese Virus will be in circulation “for the foreseeable future” and must be accepted as just another virus.

The Journal of the American Medical Association (JAMA) will classify it as such, and the world should treat it as just another form of influenza, the “experts” now say.

The reason they are changing their tune, of course, is because they now want people to take annual covid shots just like annual flu shots. Covid injections are intended to become a seasonal ritual, in other words.

“Widespread vaccine- and infection-induced immunity, combined with the availability of effective therapeutics, could blunt the effects of future outbreaks,” the FDA says.

“Nonetheless, it is time to accept that the presence of SARS-CoV-2, the virus that causes COVID-19, is the new normal.”

“It will likely circulate globally for the foreseeable future, taking its place alongside other common respiratory viruses such as influenza. And it likely will require similar annual consideration for vaccine composition updates in consultation with the [FDA].”

Annual covid shots will ensure that Big Pharma receives a steady stream of new income from state and local governments, which will likely be expected to buy the shots using taxpayer money in order to administer for “free.”

“The need for annual vaccinations in perpetuity is convenient for the pharmaceutical companies,” wrote a reader at the Daily Wire.

“I think a better alternative is to encourage people to lose weight and get in shape, and treat illness with therapeutics. The problem is that the cash flow isn’t as good as vaccinations so those options won’t be considered as serious. (Also, do your best not to get old.)”

“We knew from the very beginning that once contracted, you had a 99%+ chance of recovering,” wrote another. “Not to mention Gates is and was financing the WHO to make sure it was called a pandemic to force government mandates while he laughed all the way to the bank.”

The post Bill Gates Confirms: COVID Is “Kind of Like The Flu” With A “Low Fatality Rate” first appeared on SHTF Plan – When It Hits The Fan, Don’t Say We Didn’t Warn You.