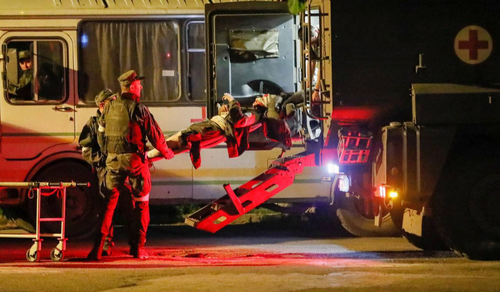 The more than month-long standoff at Mariupol’s Azovstal steelworks plant is finally over, after for many weeks the siege of the large complex by Russian forces remained the focus of international headlines, and following a series of high-risk civilian evacuations, some of them under the auspices of UN and Red Cross emergency teams.

The remnant hundreds of armed Ukrainian Azov battalion militants which had refused to come out have now surrendered in the Monday night hours. “Reuters saw about a dozen buses apparently carrying Ukrainian fighters leaving the plant on Monday. It was not possible to determine how many people were aboard.”

Widespread reports say that some 300 Ukrainian fighters have laid down their weapons and emerged from the cavernous facility. “More than 260 Ukrainian soldiers were evacuated from the besieged Azovstal steel plant in the port city of Mariupol,” Ukraine’s Deputy Defense Minister Ganna Malyar said. Another “53 heavily wounded (soldiers) were evacuated from Azovstal to the medical mortgage near Novoazovsk for medical aid,” according to Malyar’s statement.

Azov issued a statement on Telegram saying they are “implementing the approved decision of the Supreme Military Command” in order to “save lives”.

And the Russian side has since confirmed that “An agreement has been reached on the removal of the wounded,” according to a Russian defense ministry statement. “A humanitarian corridor has been opened through which wounded Ukrainian servicemen are being taken to a medical facility in Novoazovsk.”

Russian media is also widely reporting the surrender at Azovstal, with RT airing some of the first footage of the evacuation of the last fighters to leave…

The Moscow Times is quoting confirmation from Ukraine’s president – who is applauding the safe surrender:

Ukrainian President Volodymyr Zelensky said “we hope to save the lives of our boys.”

“I want to underline: Ukraine needs its Ukrainian heroes alive. This is our principle,” he said in a video statement.

Crucially, Novoazovsk – where the wounded Ukrainian fighters are being taken – is in Russian-controlled territory about 40km east of Mariupol. The surrendered troops are reportedly now in the custody of the pro-Moscow Donetsk People’s Republic. Likely Kiev will seek to negotiate their return for captured Russians currently in Ukrainian military custody.

Azov battalion, which has long been widely acknowledged even in prior mainstream media reporting as a neo-Nazi group, is asking the Ukrainian public for continued “support” – given this surrender (after previously vowing multiple to times to ‘fight till the end’) will likely be viewed by some as premature capitulation. During the long siege, all that were stuck in the facility had been running out of food, supplies, and ammunition as Russian forces had them completely surrounded. Last month President Putin is said to have ordered the military to simply wait them out, as opposed to what would have likely been a high death toll operation to enter the underground complex beneath the huge plant.