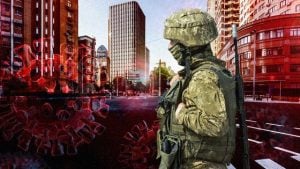 Unless more Danish agree to be injected with the experimental gene therapy shots falsely being called “vaccines,” a tyrant is threatening to “shut down society.”

Over 75 percent of Denmark’s 5.8 million inhabitants have been fully vaccinated. But that’s not good enough for one Danish health minister, because people are still coming down with colds and the flu. Despite the fact that 85 percent of people over the age of 12 are vaccinated, Denmark has seen more than 1,000 daily cases of COVID for a week straight.

“If we are to keep Denmark open, we must have more people get the vaccine,” said Health Minister Magnus Heunicke. So coercion didn’t work. Now come the threats. Next, come the punishments.

Medical Journal: Get The COVID-19 Vaccine, Or Be Punished HARSHLY

Last year, Danish authorities tried to pass a law that would have allowed the forced vaccination of anyone, with police being used to physically detain people and hold them down while being jabbed, but the effort was abandoned after mass protests, according to a report by Summit News. But that hasn’t stopped the population from willingly submitting to the shots.

Although Heunicke said the vaccine would remain voluntary, he also warned the unvaccinated that their refusal to get the jab “no longer works.”

They continue to move the goalposts and won’t stop doing so. It will never be good enough. Not until every human has complied with their enslavement and taken the shots. They’ve already told us this. We are slaves if we take the shots, and we’ll be slaves if we continue to refuse.

This shot is a part of their agenda and the longer we hold out, the better chance we have. The fact that so many have already taken these jabs is a testament to just how willingly obedient so many of the slaves are to the ruling class that doesn’t give a damn about them.

The post A Health Minister From Denmark Is Threatening To “Shut Down Society” Unless More Get Jabbed first appeared on SHTF Plan – When It Hits The Fan, Don’t Say We Didn’t Warn You.

The Biden Legacy: Former Policewomen Are Hunted for Assassination and Beatings by Taliban in Afghanistan

IT’S A CRISIS: Car Manufacturers Around the World Are Halting Production Due to a Lack of Computer Chips – Repair Shops Also Affected

EXCLUSIVE: New Information Shows Wisconsin Speaker Robin Vos Was Intimately Behind the Insertion of Drop Boxes Across the Country

New information out of Wisconsin shows that the state’s Speaker Robin Vos was more intimately involved in the creation of ballot drop boxes than...
News & Current Events

A 15-year-old football player died following the National Football Cup tournament that took place in Goianésia, a municipality in the state of Goiás, Brazil.Pedro...

STEVE BANNON ON FIRE: “Suck On It! – We’re Going to Decertify Those Electors… It’s Going to Lead to the Total and Complete Destruction...

“We Knew It Was Just a Matter of Time Before the – Big Tech Sh*thole You Work For Would Try to Silence Us” –...