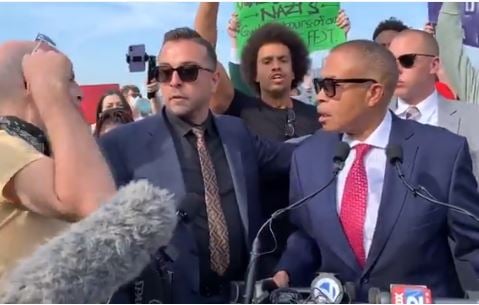 On Tuesday former Detroit Chief of Police James Craig formally announced his run for Michigan governor at a Detroit rally at Belle Isle.

Craig will likely take on unhinged tyrant Gretchen Whitmer in the gubernatorial race. Unfortunately for Craig, violent leftists physically threatened him and shut down his rally in Detroit before it could get started.
One angry white liberal got in Craig’s face and threatened the black Republican with physical violence.

Ex-Detroit Police Chief James Craig formally announced he will run for Michigan governor as a Republican challenger to Gov. Gretchen Whitmer, but he was drowned out by dozens of “Detroit Will Breathe” protesters who surrounded the podium. https://t.co/tKLgRyfHFb

Previous articleBREAKING: Pennsylvania Senate Committee will Vote TOMORROW on Subpoenas Including Requests for 2020 Election Related Data and Activities
Next articleProject Veritas Whistleblower: Washington Nursing Home Patient Dies After Being Given a ‘Chemical Restraint’ to Coax Her Into Taking Vaccine Against Her Will; Was Allegedly Told Jab Is a “Flu Vaccine” – (VIDEO)
News & Current Events

Tennis star and former world number 25, Jeremy Chardy, says his season is over after reactions to the vaccine that he took weeks ago. Per...