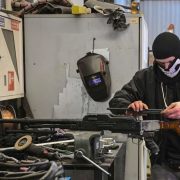 The Kalashnikov designed PK machine gun is one of the most ubiquitous general purpose machine guns in the world. It was designed by Mikhail Kalashnikov and his team in the late 1950s. We’ve seen a number of PKMs in Ukraine already but another variant, the PKT, has popped up in a couple of interesting pieces of press footage. The first piece of footage of the workshop surfaced on the 9 March and a France24 report was published on the 16 March. The PKT itself was developed in 1968 to replace the SG-43-derived SGMT. The PKT is primarily used as a coaxial gun on armoured vehicles including the MT-LB, BTR, BMD and BMP series and Russia’s T-72, T-89 and T-90 series of tanks. One thing the Ukrainians have not been short of is captured and abandoned Russian armoured vehicles. The adapted PKTs will probably be used to help equip the Territorial Defence Force battalions which have been raised across Ukraine.

The PKT is solenoid fired, with the gunner pushing a button to fire the gun. This means that it obviously has no pistol grip or trigger assembly but it also lacks sights and a bipod. So when the Ukrainians are salvaging these guns, they are essentially useless for immediate ground use. The footage from the workshops shows that they have developed a simple stock and pistol grip assembly. The stock slides into the trunnion at the rear of the receiver, where the solenoid firing unit normally fits. The pistol grip and trigger mechanism assembly are then pivoted up and secured by a cross pin. There appears to be a simple hook projecting up from the trigger mechanism assembly which trips the sear inside the PKT.

The stock appears to be from a standard PK and the pistol grip is a widely available aftermarket AK-pattern grip which seems to be held in place by a large nut and bolt. To get around the PKT’s lack of sights, the workshop have fitted a scope mount, welded to the left side of the stock assembly. The gun is seen here with what appears to be a thermal optic.

In the second piece of footage, we see some adapted PKTs with classic AK pistol grips attached to stock assemblies. The pistol grip no longer hangs free but is attached to the stock. The trigger mechanism also appears to have been redesigned. Now when the trigger is pulled an arm protrudes from the stock, it pivots from the top – rather than from the bottom as in the example we saw in the first video. This might suggest that the gun featured in the 9 March footage is the workshop’s initial prototype. If so, they have moved from a relatively crude design to a more sophisticated one in about a week. From the France24 report, it seems the engineers and mechanics had the benefit of some military experience and some technical drawings.

In terms of historical precedent – there is plenty. As long as tanks have had machine guns infantry have been salvaging their guns for ground use. Seen during both world wars and in conflicts around the world. In terms of ad-hoc weapons for home defence forces like the Ukrainian Territorial Defense Force, the British Home Guard during the Second World War were partially equipped with aerial Lewis Guns which were retrofitted with bipods and stocks. The adaptation of PKTs specifically was seen during the Chechen Wars and in 1992 the Nagorno-Karabakh War. Further adaptation have even been seen in Ukraine since 2014.

A kit was reportedly designed by Tula which allowed a PK stock with a rear sight and a pivoting pistol grip to slot into the rear trunnion of the gun. This provided a mechanism to fire the gun and a bipod with a front sight could be fitted. It is unclear if this has ever been fielded.

From the footage, it appears the workshop is also working on adapting NSVTs, the vehicle mounted variant of the 12.7×109mm NSV heavy machine gun. The mechanic lifts an NSVT without its barrel to show a workshop-made pistol grip assembly with some box steel projecting out the rear, perhaps for a stock to be fixed to.