While the AR-15 is an all-time American favorite, the NFA limits the use of high-powered rifles. To rectify the situation, gun manufacturers introduced the non-regulated, legal AR-15 pistol.

See how this variant fares against the standard rifle version!

RELATED: Guide on How to Use an AR-15

The Wilson Combat Protector AR-15 is undoubtedly a solid firearm. It shoots well, has a strong build, and consists of reliable components that very rarely malfunction—if at all. The majority of the firearm was manufactured and assembled in-house.

If you want to feel like Rambo on your next hunting trip, try the Faxon Bantam AR-15. It offers excellent reliability for hundreds of rounds and above-average accuracy. It shoots better than Wilson Combat AR-15s, that’s for sure.

They also offer the last-round bolt hold despite costing only around $900 to $1,000. This feature keeps the bold open after the last round and allows quick magazine reloads, thus mimicking a continuous shooting cycle.

The Aero Precision EPC 9 AR-15 is a 9mm caliber pistol caliber carbine popular for its affordable price tag. Most gun shops sell these for just around $600 to $900—depending on the packaged deal.

Apart from affordability, shooters will also appreciate how easy it is to find replacement and customization parts for these pieces. You can modify these however you want.

Shooters who find themselves complaining about how even the best AR-15 pistols are bulky and heavy should try the Daniel Defense MK18.

It has a compact, light frame perfect for maneuvering tight spaces. Even inexperienced shooters could use these indoors or as a truck gun without risking friendly fires.

The only downside to the Daniel Defense MK18, however, is it comes with a steep price. Due to the high-quality, compact materials used, the piece now retails upward of $2,200.

When it comes to versatility, shooters would be hard-pressed to find anything that trumps the SIG MCX Virtus Patrol.

AR-15 pistols are already quite easy to customize, but SIG takes it up a notch with the Virtus Patrol. Shooters can even configure the piece in 500 different combinations.

Take your weekend plinking to the next level with the Palmetto State Armory AR-15 series. It’s an affordable, reliable, and accurate AR-15 that you can score from $500 and up.

The only aspect that this piece underperforms in is accuracy, although you can easily fix the issue by adding high-quality optics.

If the loud firing noises from PCCs and AR-15 pistols annoy you, opt for the Springfield Saint Pistol. It features a unique, 9.6″ CMV barrel for proper balance in its performance and quick handling.

Shooters recognize BCM for their quality AR variants, and the BCM Recce 11 KMR-A does not disappoint. It comes with a carbine-length gas system and a reliable 5.56mm NATO chamber forged in high-pressure tested metal.

All these combined make the KMR-A a reliable all-season, all-weather firearm.

There are quite a few reliable AR-15 pistols on this list that cost under $1,000. Yes, the Diamondback Firearms DB15 series offers excellent reliability and accuracy, but it is a fantastic beginner’s weapon because it comes complete with several accessories.

Different shops might carry varying packages, but most have furniture, upgraded triggers, quality sights, and a rock-hard case.

If you’re in the market for entry-level PCCs, the top AR-15 pistols would definitely include the Ruger AR-556. It has reliable components that infrequently malfunction, a comfortable handgrip. The standard 8500 model costs $959.

Another thing about reliability is that its performance will remain consistent despite the current setting. Whether you are shooting inside a controlled, regulated firing range or in the middle of a forest, you can continue relying on its accuracy and dependability. 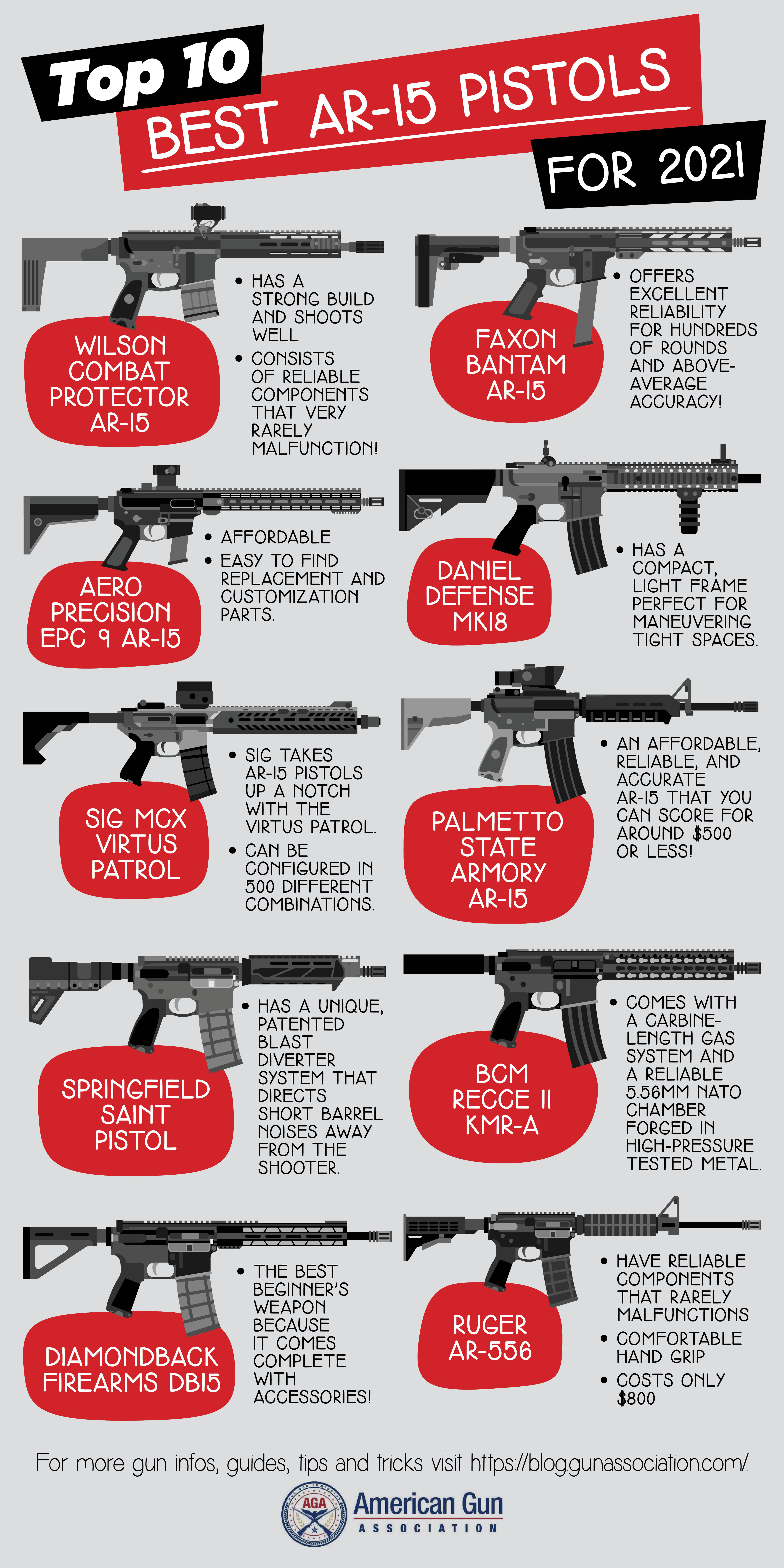 Admittedly, the AR-15 drew a lot of flak during its debut. While it does have less accuracy and power than its well-received rifle counterpart, bear in mind that AR-15 rifles are highly regulated by the NFA. In fact, most states have already banned them. On the contrary, shooters from many parts of the country can freely purchase and use any item on this list.

Apart from the AR-15 being a legal firearm, these pieces are highly versatile. Skilled and experienced shooters can maximize AR-15 pistols for hunting, home defense, trail hiking, and competition shooting purposes. It all boils down to your shooting preferences.

Have you tried any of these AR-15 pistols before? Share your experience with us in the comments section below!

Disclaimer: All content on this site is for informational purposes only. Please read our full disclaimer here.

The Barrett MRAD (Multi-Role Adaptive Design) with a Schmidt & Bender riflescope is how today’s Photo Of The Day is introduced. The sniper is...

Happy Thanksgiving from TFB and TFBTV! Why We’re Thankful