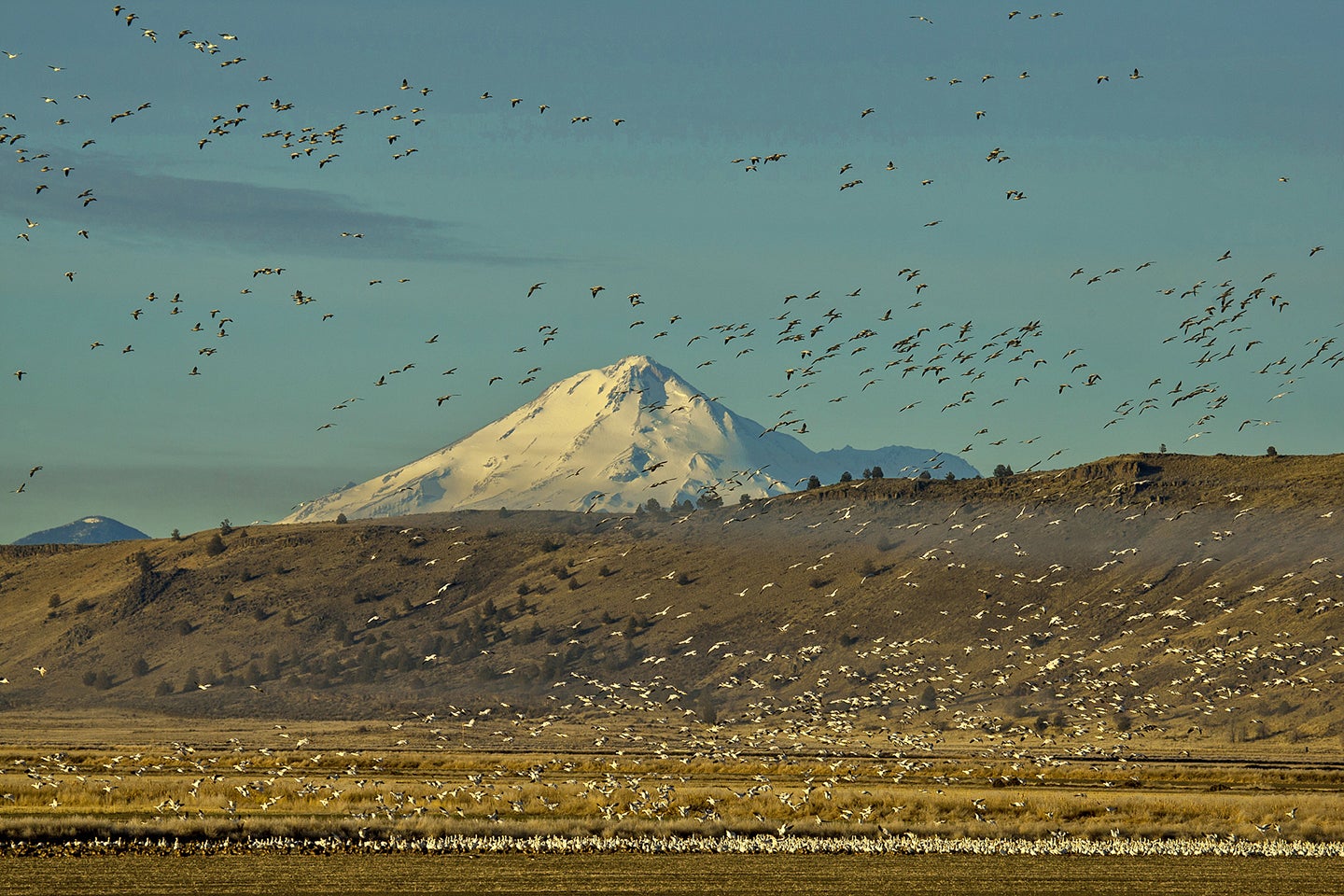 The Klamath Basin is a major stopover for waterfowl. Jordan Jones / USFWS

The drought in the West and High Plains has taken a toll on waterfowl habitat, and the Lower Klamath NWR was no exception. The wetlands at Lower Klamath were nearly dry until Sept. 3, when California Waterfowl Association secured water rights from a private rancher. The Oregon Water Resources Department approved the transfer, which CWA purchased with an initial down payment of $750,000 (they are asking the federal government to pay for the remaining balance since it’s an NWR).

The refuge will receive 3,750 acre-feet of water per year, though this season the unit will only get 700 acre-feet. CWA says other water rights holders are interested in transferring their water rights to help fill the refuge, but whether that happens is yet to be seen.

“While this amount of water is small compared with the refuge’s overall need of about 100,000 acre-feet of water per year, this success is enormously significant,” says Rob Plath, chairman of CWA’s Lower Klamath Refuge task force in a statement released by CWA.

Lower Klamath NWR has historically been the last in line to receive water from the Klamath Irrigation Project, which delivers water to farmers in the region first. Depending on water levels in Upper Klamath Lake, the NWR would get no water at all in some years. It’s a serious issue for waterfowl in the Pacific flyway, as 80 percent of the entire flyway population stages or winters in the Klamath Basin during the spring and fall. Securing water rights is a first step in trying to return the NWR to full pool.

“I am extremely gratified to see water going onto Unit 2 of the Lower Klamath National Wildlife Refuge,” says Kurt Thomas, whose family owns Agency Ranch, and whho sold the water rights to CWA. “I grew up hunting Tule Lake and Lower Klamath, and transferring our pasture irrigation water to irrigate wetland plants for the benefit of ducks and shorebirds is an extraordinary legacy for my family.”

Saving the Greentree Reservoirs of Arkansas

For decades, Arkansas duck hunters have maligned the number of out-of-state license plates that have lined public boat ramps at their famed state waterfowl management areas. The crowding became so intolerable that Arkansas put a limit on the number of days that non-residents could hunt the WMAs.

But a change in water management practices at Bayou Meto, Hurricane Lake, and Bayou DeView WMAs may keep more out-of-staters home this year, and have some Arkansas hunters crossing state lines to find birds. Essentially what will happen at all three WMAs is a return to what Mother Nature intended. The water levels at each WMA will mostly be able to rise and fall in accordance with local rainfall and river flooding so the hardwood bottomland forest can rejuvenate.

The previous management practice was to capture the water, holding it inside the WMAs by closing off water-control gates. And while that was once good for duck hunters and ducks in the fall, habitat has suffered and so has the hunting. Over the decades, water was kept on the red oak trees—willow, nuttall, and cherrybark— for too long or at the wrong times each season, causing die-offs or stressing the trees so that they won’t produce the same number of acorns mallards and woods ducks love to feast on in the fall.

“We really started talking about these issues and the need for change in water management in 2017, and a lot of work has gone on behind the scenes to study and build the groundwork for major renovations to infrastructure,” said Brad Carner, chief of wildlife management for the AGFC. “Hunters will begin to see some changes in how flooding occurs on these areas as we now move forward with some of the actions developed through that background work.”

Read Next: Southern Duck Hunting Culture Will Adapt to Survive

At Bayou Meto, officials will hold artificial water levels at 179 MSL (mean sea level), which will help many of the distressed red oaks. It will affect 1,857 acres that normally hold water. The famed greentree reservoir can rise above that threshold through rain and river flow, but managers will not increase the level beyond 179. During the 2022-2023 season that level will be dropped to 178.5, which will affect 4,718 acres. Flooding will not occur until Nov. 15.

Effectively that will mean less water for hunters in an already crowded wetland if it’s a dry fall. But in the long run it will improve habitat and duck hunting.

“This stands to impact much more hunter access on the WMA,” Carner said. “Forty-six percent of Government Cypress, 53 percent of Upper Valier and 31 percent of Lower Vallier are above 178.5 MSL. The extra year before we implement this change will hopefully allow us to get in and improve access where we can on these greentree reservoirs.”

Old trees are being cut down at Bayou DeView to allow the regeneration of the forest. The water gates there will also be left open for five years to allow natural growth of willow oaks.

“Wildlife stand improvements in 2019 opened up the canopy of that forest and allowed sunlight to reach the forest floor,” Carner says. “We’ve seen an excellent crop of willow oaks sprout from that effort. Logging being conducted in Bayou DeView will open more forest up for this regeneration to create the next forest and benefit ducks and other wildlife. We need to allow water to flow freely through the area to protect those young trees that will one day be the forest our children and grandchildren will hunt.”