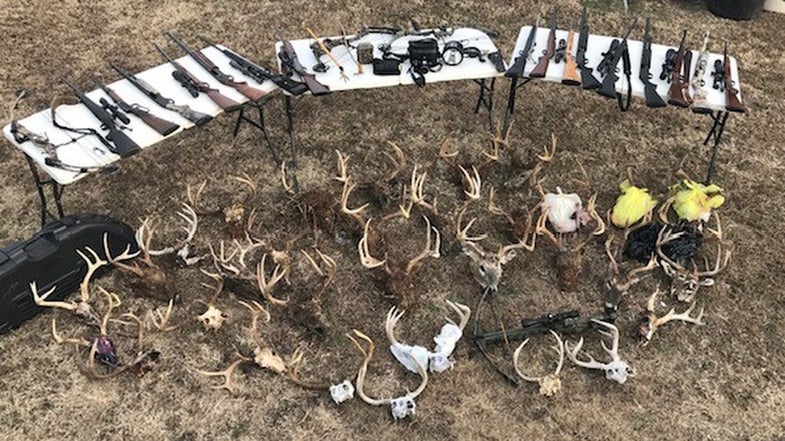 Guns, bows, night-vision goggles, and 30 deer heads were confiscated in the Arkansas poaching bust. The bust was made possible by reports to the state’s poaching hotline. AGFC

In one of the more egregious poaching cases in recent years, two Arkansas game wardens arrested five poachers after a troubling discovery at a suspected poacher’s home: A garden of some-30 buried deer skulls and heads from illegally-taken whitetails. The bizarre “Garden of Skulls” poaching case was closed in 2016, but it was not widely publicized at the time. The Arkansas Game and Fish released details on the case last week as reminder to helpful citizens that reporting suspicious activity to your state’s poaching hotlines can help catch poachers, even if those tips don’t produce immediate results.

Such was the case with residents near Jonesboro, Arkansas, who filed numerous complaints ahead of the bust. Sgt. Jeff Dalton and Cpl. Bret Ditto of the AGFC had fielded reports from all over Craighead County, including complaints of shots fired in the night, unknown or suspicious vehicles, and out-of-season kills. Deer carcasses or parts of deer were being left in fields and ditches. As the complaints intensified and remains of dead deer continued to turn up, the officers concluded that a poaching ring was to blame. A break in the case came when officials received a tip about multiple heads and antlers in stacks of tires at one suspect’s home. Dalton and Ditto obtained search warrants and called on their fellow wildlife officers to help them conduct a search of the property.

During the course of the next few days of interrogations, searches, and evidence seizure, the game wardens discovered what they described as a garden of skulls by one of the suspect’s residence. According to the AGFC, “all of the deer heads were neatly ‘planted’ in a row with antlers protruding from the ground.” Officials suspected the poachers responsible were trying to use a low-maintenance method of making European mounts by burying fresh skulls and allowing insects and bacteria to pick the skulls clean. In all, 30 deer heads and portions of poached turkeys were recovered. Officers also discovered the talons of an owl and hawk, which are illegal to possess.

Other items confiscated as evidence included 14 guns, three bows, and night-vision goggles. Ultimately, five suspects pleaded guilty to 122 charges including night hunting, deer hunting out of season, turkey hunting out of season, over limit of deer, hunting from a public road, prohibited methods for taking turkey, taking of raptors, big game checking requirement, big game tagging requirement, and an aiding and abetting a violation. Each man received $11,250 in fines, six years of hunting and fishing license suspensions, two years of probation, and 160 hours of community service. The court also ordered all individuals to successfully complete a hunter education course.

“This time of year we get a high increase in night hunting cases,” says Randy Zellers, AGFC’s assistant chief of communications. Zellers noted that the “Garden of Skulls” poaching case was never widely publicized in 2016, but that it’s a good example of why poaching tips are so important. Diligent reporting of suspicious hunting activity can help game wardens identify a pattern of illegal behavior and attempt to catch the offenders in the act of poaching, such as by staking out a robotic deer decoy.

“Someone calls about a night-hunting case and a wildlife officer comes out there an hour later, when it’s too late. So people get discouraged and don’t report again,” Zellers says. “But even if it’s too late that time, it’s one more record that our guys have to work with.”

Almost every state has a hotline or program for helping concerned citizens reporting poaching activity. You can find your state’s poaching hotline here.