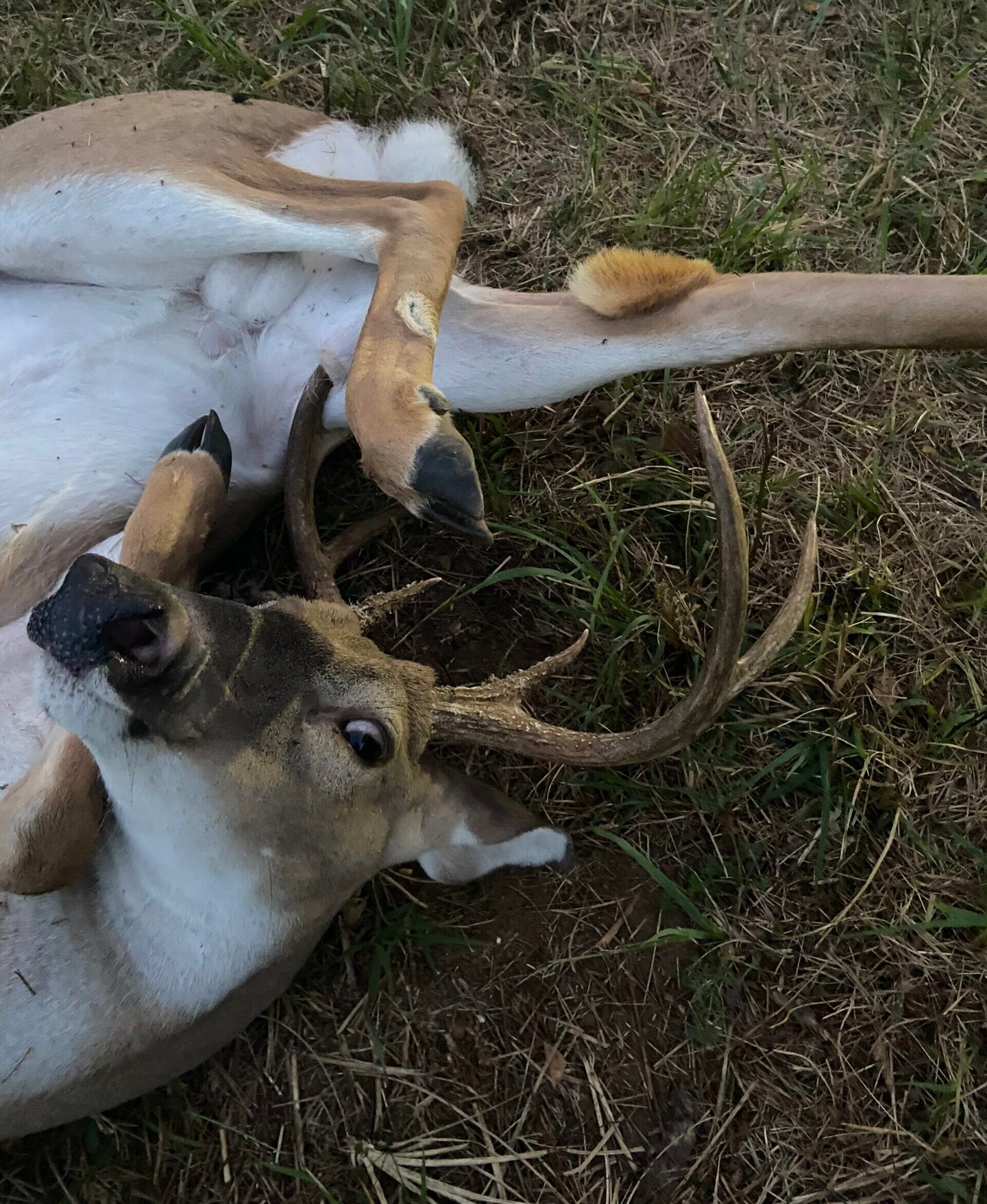 The young bucks was quite exhausted from the fight with himself. Courtesy Sean Redd

Sean Redd was watching a group of deer feeding nearby on his 40-acre property outside the town of Drasco, in north-central Arkansas, on Sept. 8 when he noticed something strange. Normally, the 40-year-old outdoorsman settles onto his porch to watch wildlife milling around a game feeder. But early in the evening last week, just after returning home from work at Cowboy Chevrolet in Heber Springs, Redd noticed the whitetails under the feeder start and run off.

Redd knew something must have spooked the deer, but he couldn’t immediately determine what. Although he couldn’t see anything from his spot on the porch, he could hear a buck grunting loudly and continuously from somewhere near the feeder.

“Buck grunting is normal, but this deer was grunting non-stop, so I figured I better check it out,” Redd told Outdoor Life. So he got in his truck and drove down to the feeder, where he discovered a young buck on the ground. It was contorted into a curled position, and not moving at all.

“I drove to within five yards of the buck. It was a young 7-pointer, about three years old, that I’d seen several times previously on my place, and he was in a real bind,” says Redd, who snapped some quick cell phone pictures of the deer before trying to help the animal.

The deer was curled into a tight circle, with the tip of its right main beam antler poking deep under the skin of its right hind leg. The antler tip had clearly pierced the buck’s hide several inches, but fortunately it hadn’t penetrated the muscle. The buck couldn’t move at all.

“He was whipped, from I guess fighting to untangle the mess he got into,” says Redd. “He wasn’t struggling when I got there, just lying there, looking at me. I don’t know how he got into that jam. Maybe it was from scratching himself with his antlers.”

Redd stepped close to the deer and held its head down by pushing on its rack, which took pressure off its tangled leg.

“He just jumped up, and ran off into the woods,” says Redd. “I didn’t think much of doing what I did. But afterward I realized helping the buck could have been a little dangerous if he started thrashing around its legs or head. But he didn’t, and it worked out good for him.”

Redd has since seen the young buck several times, feeding normally or walking and with other bucks. The deer seems completely recovered from its unusual predicament. “It was just one of those weird things that sometimes happens to wildlife, and deer.”

Previous articleBiden in SoCal: “You Either Keep Newsom as Your Governor or You’ll Get Donald Trump – Not a Joke” (VIDEO)
Next articleFive Zebras Are Running Loose in Maryland
News & Current Events

A Texas abortionist has admitted that he has already broken the state’s new law banning the procedures after a fetal heartbeat is detected. Alan Braid,...
News & Current Events

This very well put together video explains three actions that are in place that will result in the collapse of the US dollar along...