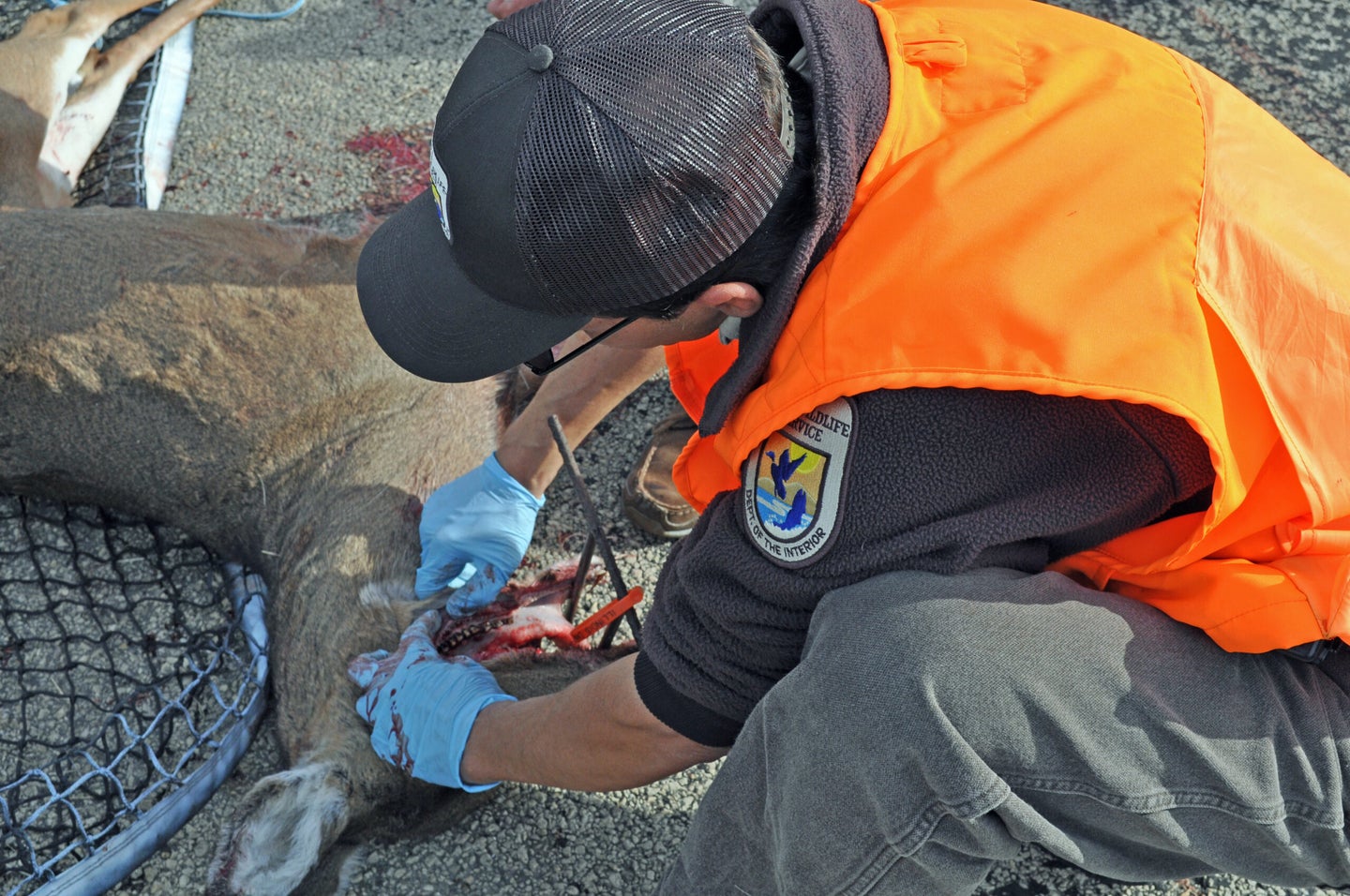 A technician samples a deer for CWD. Tina Shaw / USFWS

The presence of chronic wasting disease, the infectious disease that’s always fatal to cervids like deer and elk, was confirmed last month on Maple Hill Farms near Gilman, Wisconsin. Since then, state and federal government agencies have been working to trace hundreds of deer that were shipped from the farm to 40 different facilities in seven states over the last five years, reports the Milwaukee Journal Sentinel.

Record reveal that nearly 400 deer were shipped from Maple Hill Farms over the last five years. Deer sales were made to facilities in 18 Wisconsin counties, as well as to farms in Illinois, Kansas, Minnesota, North Dakota, Oklahoma, and Pennsylvania. Officials say this could be the most extensive network of deer shipments from a CWD-positive facility ever documented.

Captive deer operations that had dealings with Maple Hill Farms are under close scrutiny. Two Wisconsin businesses have been put under quarantine by state officials, Main Farms in Appleton and Van Ooyen Whitetails in Antigo, meaning they can’t ship or receive animals. Maple Hill Farms, which currently holds about 300 deer on 22 acres, is also under quarantine. Owner Laurie Seale says her farm was working to cultivate a CWD-resistant herd through selective breeding.

“It’s a death sentence for us,” Seale told the newspaper, noting that the herd has been closed since 2015 and the only unusual thing she did this year was buy hay from North Dakota rather than locally. “My farm of 32 years will be done with one test. That’s why we had done everything we could to keep it out.”

Read Next: The Deer Plague: An Inside Look at the Fight to Stop Chronic Wasting Disease

Officials say five Wisconsin deer herds with ties to Maple Hills deer are quarantined, and ongoing investigations of deer transferred to other facilities from Maple Hills will result in more quarantines. Feeding and baiting bans for wild deer are now in effect in Wisconsin’s Taylor, Calumet, and Outagamie counties.

While there is no current evidence that CWD can be transmitted to humans, the CDC advises against consuming venison from CWD-positive deer. You can find out more about how deer hunters can help monitor and stop the spread of CWD here.

The post A CWD Outbreak at a Captive Deer Farm in Wisconsin Is Creating Problems in 7 States appeared first on Outdoor Life.

Concerned Mother Wants to Air TV Ad on Pfizer’s Dangerous Vaccine After Daughter Is Severely and Permanently Damaged — But Comcast Refuses Ad at...

Who Did It Better – Joe Biden or Ricky Bobby?

A Federal Judge Has Allowed Texas to Seek Internal Documents from Facebook, Twitter and Google Regarding How They Censor Conservatives

Sen. Josh Hawley Calls on AG Merrick Garland to Resign After Mobilizing FBI Against Parents Without Legal Basis and Premised on Complete Lies

Previous articleThe Emperor 1911 By SK Customs In Honor Of The Mexican War Of Independence
Next articleArizona State Rep. Mark Finchem Calls for the 2020 Election Results to be Decertified Based on the Plethora of Evidence Identified in the Senate’s Audit
News & Current Events

Biden continues his legacy of empty rallies, no pressers, no cabinet meetings, no enthusiasm and no supporters.  Only fools would believe this guy won...
News & Current Events

17 American Missionaries, Including Children, Kidnapped by Gang in Haiti

17 American Christian missionaries, including children, were kidnapped by a gang in Haiti this weekend. According to reports, the Ohio-based Christian group was on their...

MUST SEE VIDEO: Another Fauci WHOPPER: The Effectiveness of the COVID Vaccines Was Another Fauci Distortion Perpetrated on the People

Archbishop Vigano: “Vaccine Victims are Sacrificed at the Altar of Moloch” (VIDEO)

Concerned Mother Wants to Air TV Ad on Pfizer’s Dangerous Vaccine After Daughter Is Severely and Permanently Damaged — But Comcast Refuses Ad at...

Who Did It Better – Joe Biden or Ricky Bobby?

A Federal Judge Has Allowed Texas to Seek Internal Documents from Facebook, Twitter and Google Regarding How They Censor Conservatives